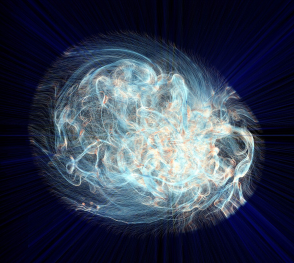 Particle advection is the approach for the extraction of integral curves from vector fields. Efficient parallelization of particle advection is a challenging task due to the problem of load imbalance, in which processes are assigned unequal workloads, causing some of them to idle as the others are performing computing. Various approaches to load balancing exist, yet they all involve trade-offs such as increased inter-process communication, or the need for central control structures. In this work, we present two local load balancing methods for particle advection based on the family of diffusive load balancing. Each process has access to the blocks of its neighboring processes, which enables dynamic sharing of the particles based on a metric defined by the workload of the neighborhood. The approaches are assessed in terms of strong and weak scaling as well as load imbalance. We show that the methods reduce the total run-time of advection and are promising with regard to scaling as they operate locally on isolated process neighborhoods. 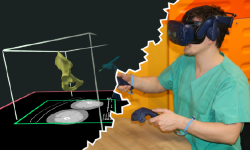 Background: As an integral part of computer-assisted surgery, virtual surgical planning(VSP) leads to significantly better surgery results, such as for oral and maxillofacial reconstruction with microvascular grafts of the fibula or iliac crest. It is performed on a 2D computer desktop (DS) based on preoperative medical imaging. However, in this environment, VSP is associated with shortcomings, such as a time-consuming planning process and the requirement of a learning process. Therefore, a virtual reality VR)-based VSP application has great potential to reduce or even overcome these shortcomings due to the benefits of visuospatial vision, bimanual interaction, and full immersion. However, the efficacy of such a VR environment has not yet been investigated.

Methods: During a training course, novices were taught how to use a software application in a DS environment (3D Slicer) and in a VR environment (Elucis) for the segmentation of fibulae and os coxae (n = 156), and they were askedto carry out the maneuvers as accurately and quickly as possible. The individual learning processes in both environments were compared usingobjective criteria (time and segmentation performance) and self-reported questionnaires. The models resulting from the segmentation were compared mathematically (Hausdorff distance and Dice coefficient) and evaluated by two experienced radiologists in a blinded manner (score).

Results: During a training course, novices were taught how to use a software application in a DS environment (3D Slicer) and in a VR environment (Elucis)for the segmentation of fibulae and os coxae (n = 156), and they were asked to carry out the maneuvers as accurately and quickly as possible. The individual learning processes in both environments were compared using objective criteria (time and segmentation performance) and self-reported questionnaires. The models resulting from the segmentation were compared mathematically (Hausdorff distance and Dice coefficient) and evaluated by two experienced radiologists in a blinded manner (score).

Conclusions: The more rapid learning process and the ability to work faster in the VR environment could save time and reduce the VSP workload, providing certain advantages over the DS environment. 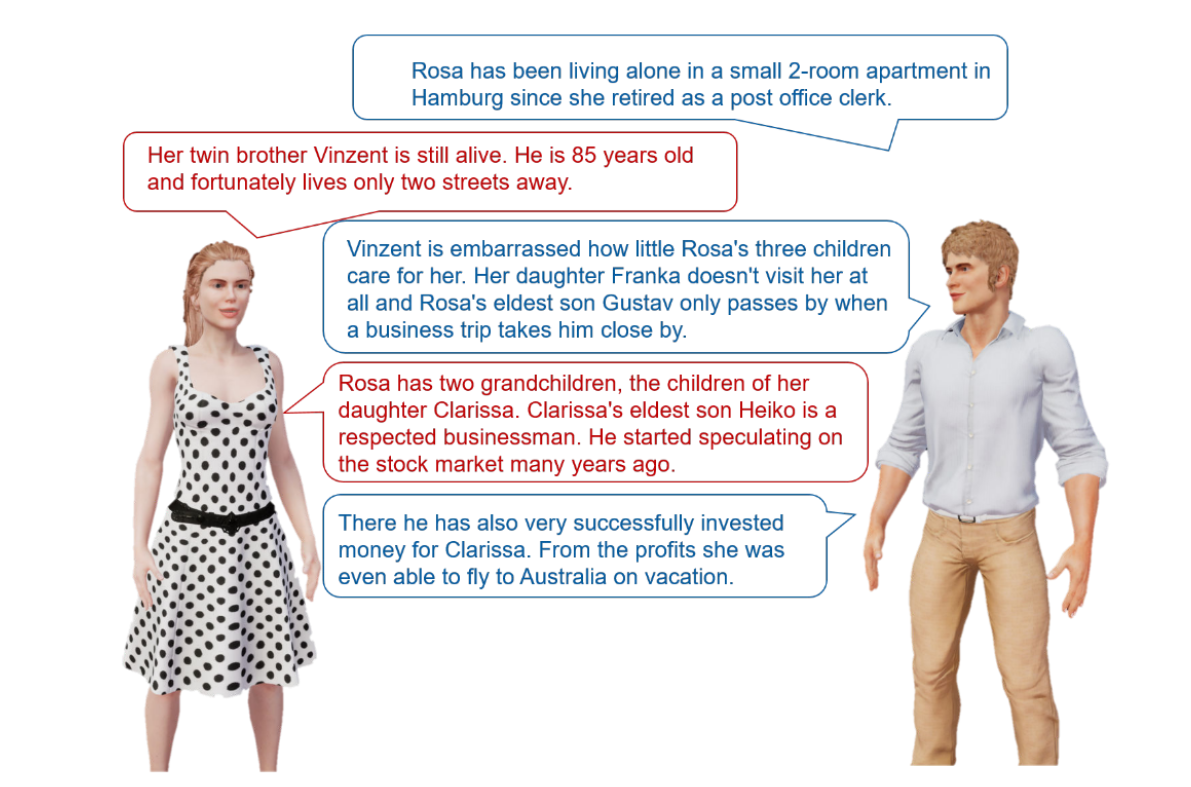 Embedding virtual humans into virtual reality (VR) applications can fulfill diverse needs. These, so-called, embodied conversational agents (ECAs) can simply enliven the virtual environments, act for example as training partners, tutors, or therapists, or serve as advanced (emotional) user interfaces to control immersive systems. The latter case is of special interest since we as human users are specifically good at interpreting other humans. ECAs can enhance their verbal communication with non-verbal behavior and thereby make communication more efficient. For example, backchannels, like nodding or signaling not understanding, can be used to give feedback while a user is speaking. Furthermore, gestures, gaze, posture, proxemics, and many more non-verbal behaviors can be applied. Additionally, turn-taking can be streamlined when the ECA understands when to take over the turn and signals willingness to yield it once done. While many of these aspects are already under investigation from very different disciplines, operationalizing those into versatile, virtually embodied human-computer interfaces remains an open challenge.

To this end, I conducted several studies investigating acoustical effects of ECAs' speech, both with regard to the auralization in the virtual environment and the speech signals used. Furthermore, I want to find guidelines for expressing both turn-taking and various backchannels that make interactions with such advanced embodied interfaces more efficient and pleasant, both when the ECA is speaking and during listening. Additionally, measuring social presence (i.e., the feeling of being there and interacting with a ``real'' person) is an important instrument for this kind of research, since I want to facilitate exactly those subconscious processes of understanding other humans, which we as humans are particularly good at. Therefore, I want to investigate objective measures for social presence. 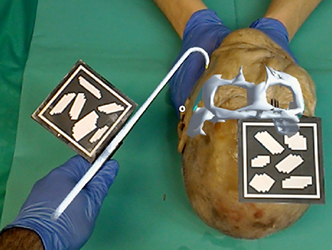 Background: Although nearly one-third of the world’s disease burden requires surgical care, only a small proportion of digital health applications are directly used in the surgical field. In the coming decades, the application of augmented reality (AR) with a new generation of optical-see-through head-mounted displays (OST-HMDs) like the HoloLens (Microsoft Corp) has the potential to bring digital health into the surgical field. However, for the application to be performed on a living person, proof of performance must first be provided due to regulatory requirements. In this regard, cadaver studies could provide initial evidence.

Objective: The goal of the research was to develop an open-source system for AR-based surgery on human cadavers using freely available technologies.

Methods: We tested our system using an easy-to-understand scenario in which fractured zygomatic arches of the face had to be repositioned with visual and auditory feedback to the investigators using a HoloLens. Results were verified with postoperative imaging and assessed in a blinded fashion by 2 investigators. The developed system and scenario were qualitatively evaluated by consensus interview and individual questionnaires.

Results: The development and implementation of our system was feasible and could be realized in the course of a cadaver study. The AR system was found helpful by the investigators for spatial perception in addition to the combination of visual as well as auditory feedback. The surgical end point could be determined metrically as well as by assessment.

Conclusions: The development and application of an AR-based surgical system using freely available technologies to perform OST-HMD–guided surgical procedures in cadavers is feasible. Cadaver studies are suitable for OST-HMD–guided interventions to measure a surgical end point and provide an initial data foundation for future clinical trials. The availability of free systems for researchers could be helpful for a possible translation process from digital health to AR-based surgery using OST-HMDs in the operating theater via cadaver studies. 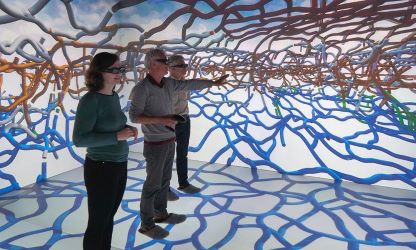 Mechanobiology requires precise quantitative information on processes taking place in specific 3D microenvironments. Connecting the abundance of microscopical, molecular, biochemical, and cell mechanical data with defined topologies has turned out to be extremely difficult. Establishing such structural and functional 3D maps needed for biophysical modeling is a particular challenge for the cytoskeleton, which consists of long and interwoven filamentous polymers coordinating subcellular processes and interactions of cells with their environment. To date, useful tools are available for the segmentation and modeling of actin filaments and microtubules but comprehensive tools for the mapping of intermediate filament organization are still lacking. In this work, we describe a workflow to model and examine the complete 3D arrangement of the keratin intermediate filament cytoskeleton in canine, murine, and human epithelial cells both, in vitro and in vivo. Numerical models are derived from confocal Airyscan high-resolution 3D imaging of fluorescence-tagged keratin filaments. They are interrogated and annotated at different length scales using different modes of visualization including immersive virtual reality. In this way, information is provided on network organization at the subcellular level including mesh arrangement, density, and isotropic configuration as well as details on filament morphology such as bundling, curvature, and orientation. We show that the comparison of these parameters helps to identify, in quantitative terms, similarities and differences of keratin network organization in epithelial cell types defining subcellular domains, notably basal, apical, lateral, and perinuclear systems. The described approach and the presented data are pivotal for generating mechanobiological models that can be experimentally tested.


The aixCAVE at RWTH Aachen University 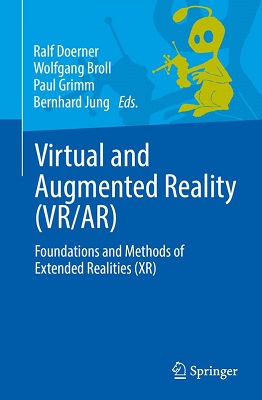 At a large technical university like RWTH Aachen, there is enormous potential to use VR as a tool in research. In contrast to applications from the entertainment sector, many scientific application scenarios - for example, a 3D analysis of result data from simulated flows - not only depend on a high degree of immersion, but also on a high resolution and excellent image quality of the display. In addition, the visual analysis of scientific data is often carried out and discussed in smaller teams. For these reasons, but also for simple ergonomic aspects (comfort, cybersickness), many technical and scientific VR applications cannot just be implemented on the basis of head-mounted displays. To this day, in VR Labs of universities and research institutions, it is therefore desirable to install immersive large-screen rear projection systems (CAVEs) in order to adequately support the scientists. Due to the high investment costs, such systems are used at larger universities such as Aachen, Cologne, Munich, or Stuttgart, often operated by the computing centers as a central infrastructure accessible to all scientists at the university.

We present a method for the interactive segmentation of textured 3D point clouds. The problem is formulated as a minimum graph cut on a k-nearest neighbor graph and leverages the rich information contained in high-resolution photographs as the discriminative feature. We demonstrate that the achievable segmentation accuracy is significantly improved compared to using an average color per point as in prior work. The method is designed to work efficiently on large datasets and yields results at interactive rates. This way, an interactive workflow can be realized in an immersive virtual environment, which supports the segmentation task by improved depth perception and the use of tracked 3D input devices. Our method enables to create high-quality segmentations of textured point clouds fast and conveniently.

Adding embodied conversational agents (ECAs) to immersive virtual environments (IVEs) becomes relevant in various application scenarios, for example, conversational systems. For successful interactions with these ECAs, they have to behave naturally, i.e. in the way a user would expect a real human to behave. Teaming up with acousticians and psychologists, we strive to explore turn-taking in VR-based interactions between either two ECAs or an ECA and a human user. 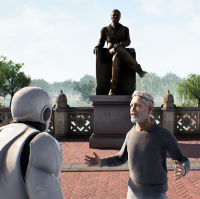 In this late-breaking report, we first motivate the requirement of an embodied conversational agent (ECA) who combines characteristics of a virtual tour guide and a knowledgeable companion in order to allow users an interactive and adaptable, however, structured exploration of an unknown immersive, architectural environment. Second, we roughly outline our proposed ECA’s behavioral design followed by a teaser on the planned user study.