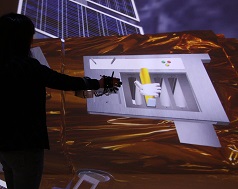 An immersive virtual environment is the ideal platform for the planning and training of on-orbit servicing missions. In such kind of virtual assembly simulation, grasping virtual objects is one of the most common and natural interactions. In this paper, we present a novel, small and lightweight electrotactile feedback device, specifically designed for immersive virtual environments. We conducted a study to assess the feasibility and usability of our interaction device. Results show that electrotactile feedback improved the user’s grasping in our virtual on-orbit servicing scenario. The task completion time was significantly lower and the precision of the user’s interaction was higher.


Physically Based Rendering of the Martian Atmosphere 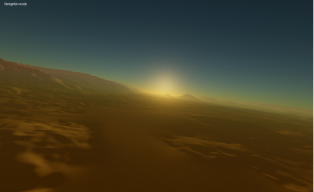 With the introduction of complex precomputed scattering tables by Bruneton in 2008, the quality of visualizing atmospheric scattering vastly improved. The presented algorithms allowed for the rendering of complex atmospheric features such as multiple-scattering or light shafts in real-time and at interactive framerates. While their published implementation corresponding to the publication was merely a proof of concept, we present a more practical approach by applying their scattering theory to an already existing planetary rendering engine. Because the commonly used set of parameters only describes the atmosphere of the Earth, we further extend the scattering formulation to visualize the atmosphere of the planet Mars. Validating the modified scattering and resulting parameters is then done by comparison with available imagery from the Martian atmosphere