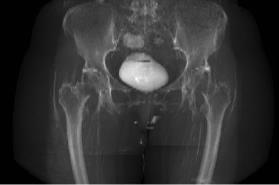 Visualising volumetric medical images such as computed tomography and magnetic resonance imaging (MRI) on picture archiving and communication systems (PACS) clients is often achieved by image browsing in sagittal, coronal or axial views or three-dimensional (3D) rendering. This latter technique requires fine thresholding for MRI. On the other hand, computing virtual radiograph images, also referred to as digitally reconstructed radiographs (DRR), provides in a single two-dimensional (2D) image a complete overview of the 3D data. It appears therefore as a powerful alternative for MRI visualisation and preview in PACS. This study describes a method to compute DRR from T1-weighted MRI. After segmentation of the background, a histogram distribution analysis is performed and each foreground MRI voxel is labeled as one of three tissues: cortical bone, also known as principal absorber of the X-rays, muscle and fat. An intensity level is attributed to each voxel according to the Hounsfield scale, linearly related to the X-ray attenuation coefficient. Each DRR pixel is computed as the accumulation of the new intensities of the MRI dataset along the corresponding X-ray. The method has been tested on 16 T1-weighted MRI sets. Anterior-posterior and lateral DRR have been computed with reasonable qualities and avoiding any manual tissue segmentations.