Do Prosody and Embodiment Influence the Perceived Naturalness of Conversational Agents' Speech? 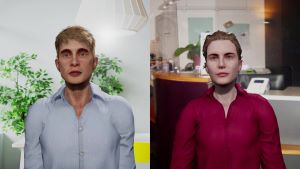 For conversational agents’ speech, all possible sentences have to be either prerecorded by voice actors or the required utterances can be synthesized. While synthesizing speech is more flexible and economic in production, it also potentially reduces the perceived naturalness of the agents amongst others due to mistakes at various linguistic levels. In our paper, we are interested in the impact of adequate and inadequate prosody, here particularly in terms of accent placement, on the perceived naturalness and aliveness of the agents. We compare (i) inadequate prosody, as generated by off-the-shelf text-to-speech (TTS) engines with synthetic output, (ii) the same inadequate prosody imitated by trained human speakers and (iii) adequate prosody produced by those speakers. The speech was presented either as audio-only or by embodied, anthropomorphic agents, to investigate the potential masking effect by a simultaneous visual representation of those virtual agents. To this end, we conducted an online study with 40 participants listening to four different dialogues each presented in the three Speech levels and the two Embodiment levels. Results confirmed that adequate prosody in human speech is perceived as more natural (and the agents are perceived as more alive) than inadequate prosody in both human (ii) and synthetic speech (i). Thus, it is not sufficient to just use a human voice for an agent’s speech to be perceived as natural - it is decisive whether the prosodic realisation is adequate or not. Furthermore, and surprisingly, we found no masking effect by speaker embodiment, since neither a human voice with inadequate prosody nor a synthetic voice was judged as more natural, when a virtual agent was visible compared to the audio-only condition. On the contrary, the human voice was even judged as less “alive” when accompanied by a virtual agent. In sum, our results emphasize on the one hand the importance of adequate prosody for perceived naturalness, especially in terms of accents being placed on important words in the phrase, while showing on the other hand that the embodiment of virtual agents plays a minor role in naturalness ratings of voices.

Being Guided or Having Exploratory Freedom: User Preferences of a Virtual Agent’s Behavior in a Museum 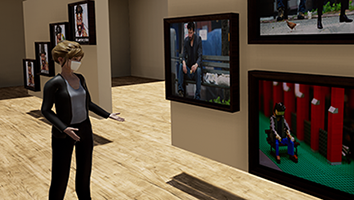 A virtual guide in an immersive virtual environment allows users a structured experience without missing critical information. However, although being in an interactive medium, the user is only a passive listener, while the embodied conversational agent (ECA) fulfills the active roles of wayfinding and conveying knowledge. Thus, we investigated for the use case of a virtual museum, whether users prefer a virtual guide or a free exploration accompanied by an ECA who imparts the same information compared to the guide. Results of a small within-subjects study with a head-mounted display are given and discussed, resulting in the idea of combining benefits of both conditions for a higher user acceptance. Furthermore, the study indicated the feasibility of the carefully designed scene and ECA’s appearance.

We also submitted a GALA video entitled "An Introduction to the World of Internet Memes by Curator Kate: Guiding or Accompanying Visitors?" by D. Hashem, A. Bönsch, J. Ehret, and T.W. Kuhlen, showcasing our application.
IVA 2021 GALA Audience Award!


Compression and Rendering of Textured Point Clouds via Sparse Coding

Splat-based rendering techniques produce highly realistic renderings from 3D scan data without prior mesh generation. Mapping high-resolution photographs to the splat primitives enables detailed reproduction of surface appearance. However, in many cases these massive datasets do not fit into GPU memory. In this paper, we present a compression and rendering method that is designed for large textured point cloud datasets. Our goal is to achieve compression ratios that outperform generic texture compression algorithms, while still retaining the ability to efficiently render without prior decompression. To achieve this, we resample the input textures by projecting them onto the splats and create a fixed-size representation that can be approximated by a sparse dictionary coding scheme. Each splat has a variable number of codeword indices and associated weights, which define the final texture as a linear combination during rendering. For further reduction of the memory footprint, we compress geometric attributes by careful clustering and quantization of local neighborhoods. Our approach reduces the memory requirements of textured point clouds by one order of magnitude, while retaining the possibility to efficiently render the compressed data.

Virtual Reality is increasingly used for safe evaluation and validation of autonomous vehicles by automotive engineers. However, the design and creation of virtual testing environments is a cumbersome process. Engineers are bound to utilize desktop-based authoring tools, and a high level of expertise is necessary. By performing scene authoring entirely inside VR, faster design iterations become possible. To this end, we propose a VR authoring environment that enables engineers to design road networks and traffic scenarios for automated vehicle testing based on free-hand interaction. We present a 3D interaction technique for the efficient placement and selection of virtual objects that is employed on a 2D panel. We conducted a comparative user study in which our interaction technique outperformed existing approaches regarding precision and task completion time. Furthermore, we demonstrate the effectiveness of the system by a qualitative user study with domain experts.

Nominated for the Best Paper Award.

Our focus, however, is an unaided wayfinding strategy, in which we use virtual pedestrians as social cues to indirectly and subtly guide users through virtual environments during scene exploration. We shortly outline the required pedestrians’ behavior and results of a first feasibility study indicating the potential of the general approach. 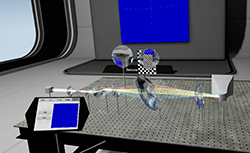 The design of optical lens assemblies is a difficult process that requires lots of expertise. The teaching of this process today is done on physical optical benches, which are often too expensive for students to purchase. One way of circumventing these costs is to use software to simulate the optical bench. This work presents a virtual optical bench, which leverages real-time ray tracing in combination with VR rendering to create a teaching tool which creates a repeatable, non-hazardous, and feature-rich learning environment. The resulting application was evaluated in an expert review with 6 optical engineers.

Conversational virtual agents, with and without visual representation, are becoming more present in our daily life, e.g. as intelligent virtual assistants on smart devices. To investigate the naturalness of both the speech and the nonverbal behavior of embodied conversational agents (ECAs), an interdisciplinary research group was initiated, consisting of phoneticians, computer scientists, and acoustic engineers. For a web-based pilot experiment, simple dialogs between a male and a female speaker were created, with three prosodic conditions. For condition 1, the dialog was created synthetically using a text-to-speech engine. In the other two prosodic conditions (2,3) human speakers were recorded with 2) the erroneous accentuation of the text-to-speech synthesis of condition 1, and 3) with a natural accentuation. Face tracking data of the recorded speakers was additionally obtained and applied as input data for the facial animation of the ECAs. Based on the recorded data, auralizations in a virtual acoustic environment were generated and presented as binaural signals to the participants either in combination with the visual representation of the ECAs as short videos or without any visual feedback. A preliminary evaluation of the participants’ responses to questions related to naturalness, presence, and preference is presented in this work. 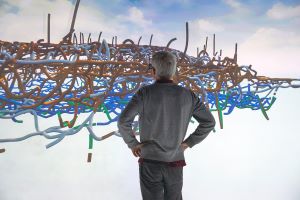 Keratin intermediate filaments make up the main intracellular cytoskeletal network of epithelia and provide, together with their associated desmosomal cell-cell adhesions, mechanical resilience. Remarkable differences in keratin network topology have been noted in different epithelial cell types ranging from a well-defined subapical network in enterocytes to pancytoplasmic networks in keratinocytes. In addition, functional states and biophysical, biochemical, and microbial stress have been shown to affect network organization. To gain insight into the importance of network topology for cellular function and resilience, quantification of 3D keratin network topology is needed.

We used Airyscan superresolution microscopy to record image stacks with an x/y resolution of 120 nm and axial resolution of 350 nm in canine kidney-derived MDCK cells, human epidermal keratinocytes, and murine retinal pigment epithelium (RPE) cells. Established segmentation algorithms (TSOAX) were implemented in combination with additional analysis tools to create a numerical representation of the keratin network topology in the different cell types. The resulting representation contains the XYZ position of all filament segment vertices together with data on filament thickness and information on the connecting nodes. This allows the statistical analysis of network parameters such as length, density, orientation, and mesh size. Furthermore, the network can be rendered in standard 3D software, which makes it accessible at hitherto unattained quality in 3D. Comparison of the three analyzed cell types reveals significant numerical differences in various parameters.

In the AUDICTIVE project about listening to, and remembering the content of conversations between two talkers we aim to investigate the combined effects of potentially performance-relevant but scarcely addressed audiovisual cues on memory and comprehension for running speech. Our overarching methodological approach is to develop an audiovisual Virtual Reality testing environment that includes embodied Virtual Agents (VAs). This testing environment will be used in a series of experiments to research the basic aspects of audiovisual cognitive performance in a close(r)-to-real-life setting. We aim to provide insights into the contribution of acoustical and visual cues on the cognitive performance, user experience, and presence as well as quality and vibrancy of VR applications, especially those with a social interaction focus. We will study the effects of variations in the audiovisual ’realism’ of virtual environments on memory and comprehension of multi-talker conversations and investigate how fidelity characteristics in audiovisual virtual environments contribute to the realism and liveliness of social VR scenarios with embodied VAs. Additionally, we will study the suitability of text memory, comprehension measures, and subjective judgments to assess the quality of experience of a VR environment. First steps of the project with respect to the general idea of AUDICTIVE are presented. 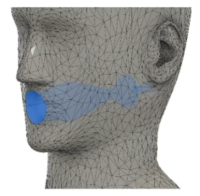 Embodied conversational agents (ECAs) are computer-controlled characters who communicate with a human using natural language. Being represented as virtual humans, ECAs are often utilized in domains such as training, therapy, or guided tours while being embedded in an immersive virtual environment. Having plausible speech sound is thereby desirable to improve the overall plausibility of these virtual-reality-based simulations. In an audiovisual VR experiment, we investigated the impact of directional radiation for the produced speech on the perceived naturalism. Furthermore, we examined how directivity filters influence the perceived social presence of participants in interactions with an ECA. Therefor we varied the source directivity between 1) being omnidirectional, 2) featuring the average directionality of a human speaker, and 3) dynamically adapting to the currently produced phonemes. Our results indicate that directionality of speech is noticed and rated as more natural. However, no significant change of perceived naturalness could be found when adding dynamic, phoneme-dependent directivity. Furthermore, no significant differences on social presence were measurable between any of the three conditions.