Fluid artwork refers to works of art based on the aesthetics of fluid motion, such as smoke photography, ink injection into water, and paper marbling. Inspired by such types of art, we created Fluid Sketching as a novel medium for creating 3D fluid artwork in immersive virtual environments. It allows artists to draw 3D fluid-like sketches and manipulate them via six degrees of freedom input devices. Different sets of brush strokes are available, varying different characteristics of the fluid. Because of fluid's nature, the diffusion of the drawn fluid sketch is animated, and artists have control over altering the fluid properties and stopping the diffusion process whenever they are satisfied with the current result. Furthermore, they can shape the drawn sketch by directly interacting with it, either with their hand or by blowing into the fluid. We rely on particle advection via curl-noise as a fast procedural method for animating the fluid flow.

Virtual Reality (VR) has been an active field of research for several decades, with 3D interaction and 3D User Interfaces (UIs) as important sub-disciplines. However, the development of 3D interaction techniques and in particular combining several of them to construct complex and usable 3D UIs remains challenging, especially in a VR context. In addition, there is currently only limited reusable software for implementing such techniques in comparison to traditional 2D UIs. To overcome this issue, we present ViSTA Widgets, a software framework for creating 3D UIs for immersive virtual environments. It extends the ViSTA VR framework by providing functionality to create multi-device, multi-focus-strategy interaction building blocks and means to easily combine them into complex 3D UIs. This is realized by introducing a device abstraction layer along sophisticated focus management and functionality to create novel 3D interaction techniques and 3D widgets. We present the framework and illustrate its effectiveness with code and application examples accompanied by performance evaluations.

Modal sound synthesis is a promising approach for real-time physically-based sound synthesis. A modal analysis is used to compute characteristic vibration modes from the geometry and material properties of scene objects. These modes allow an efficient sound synthesis at run-time, but the analysis is computationally expensive and thus typically computed in a pre-processing step. In interactive applications, however, objects may be created or modified at run-time. Unless the new shapes are known upfront, the modal data cannot be pre-computed and thus a modal analysis has to be performed at run-time. In this paper, we present a system to compute modal sound data at run-time for interactive applications. We evaluate the computational requirements of the modal analysis to determine the computation time for objects of different complexity. Based on these limits, we propose using different levels-of-detail for the modal analysis, using different geometric approximations that trade speed for accuracy, and evaluate the errors introduced by lower-resolution results. Additionally, we present an asynchronous architecture to distribute and prioritize modal analysis computations.

In contrast to the wide-spread use of 6-DOF pointing devices, freehand user interfaces in Immersive Virtual Environments (IVE) are non-intrusive. However, for gesture interfaces, the definition of trigger signals is challenging. The use of mechanical devices, dedicated trigger gestures, or speech recognition are often used options, but each comes with its own drawbacks. In this paper, we present an alternative approach, which allows to precisely trigger events with a low latency using microphone input. In contrast to speech recognition, the user only blows into the microphone. The audio signature of such blow events can be recognized quickly and precisely. The results of a user study show that the proposed method allows to successfully complete a standard selection task and performs better than expected against a standard interaction device, the Flystick.


Cirque des Bouteilles: The Art of Blowing on Bottles

Making music by blowing on bottles is fun but challenging. We introduce a novel 3D user interface to play songs on virtual bottles. For this purpose the user blows into a microphone and the stream of air is recreated in the virtual environment and redirected to virtual bottles she is pointing to with her fingers. This is easy to learn and subsequently opens up opportunities for quickly switching between bottles and playing groups of them together to form complex melodies. Furthermore, our interface enables the customization of the virtual environment, by means of moving bottles, changing their type or filling level. 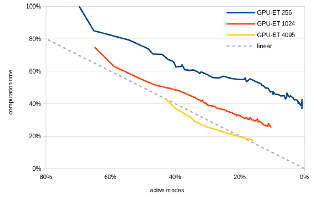 Modal sound synthesis is a useful method to interactively generate sounds for Virtual Environments. Forces acting on objects excite modes, which then have to be accumulated to generate the output sound. Due to the high audio sampling rate, algorithms using the CPU typically can handle only a few actively sounding objects. Additionally, force excitation should be applied at a high sampling rate. We present different algorithms to compute the synthesized sound using a GPU, and compare them to CPU implementations. The GPU algorithms shows a significantly higher performance, and allows many sounding objects simultaneously. 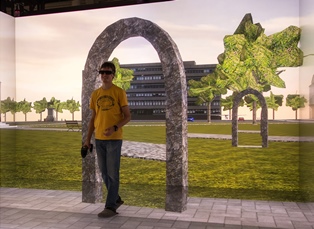 Real walking is the most natural method of navigation in virtual environments. However, physical space limitations often prevent or complicate its continuous use. Thus, many real walking interfaces, among them redirected walking techniques, depend on a reorientation technique that redirects the user away from physical boundaries when they are reached. However, existing reorientation techniques typically actively interrupt the user, or depend on the application of rotation gain that can lead to simulator sickness. In our approach, the user is reoriented using portals. While one portal is placed automatically to guide the user to a safe position, she controls the target selection and physically walks through the portal herself to perform the reorientation. In a formal user study we show that the method does not cause additional simulator sickness, and participants walk more than with point-and-fly navigation or teleportation, at the expense of longer completion times. 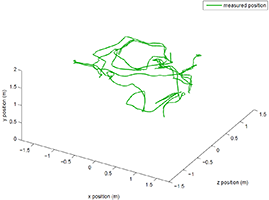 A common problem in Virtual Reality is latency. Especially for head tracking, latency can lead to a lower immersion. Prediction can be used to reduce the effect of latency. However, for good results the prediction process has to be reliably fast and accurate. Human motion is not homogeneous and humans often tend to change the way they move. Prediction models can be designed for these special motion types. To combine the special models, a multiple model approach is presented. It constantly evaluates the quality of the different specialized motion prediction and adjusts the set of motion models. We propose two variants, and compare them to a reference prediction algorithm.


Comparing Auditory and Haptic Feedback for a Virtual Drilling Task 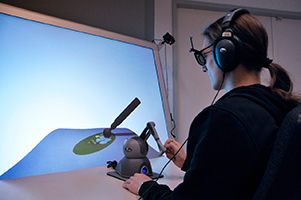 While visual feedback is dominant in Virtual Environments, the use of other modalities like haptics and acoustics can enhance believability, immersion, and interaction performance. Haptic feedback is especially helpful for many interaction tasks like working with medical or precision tools. However, unlike visual and auditory feedback, haptic reproduction is often difficult to achieve due to hardware limitations. This article describes a user study to examine how auditory feedback can be used to substitute haptic feedback when interacting with a vibrating tool. Participants remove some target material with a round-headed drill while avoiding damage to the underlying surface. In the experiment, varying combinations of surface force feedback, vibration feedback, and auditory feedback are used. We describe the design of the user study and present the results, which show that auditory feedback can compensate the lack of haptic feedback.

In this contribution, we present an immersive visualization of room acoustical simulation data. In contrast to the commonly employed external viewpoint, our approach places the user inside the visualized data. The main problem with this technique is the occlusion of some data points by others. We present different solutions for this problem that allow an interactive analysis of the simulation data. 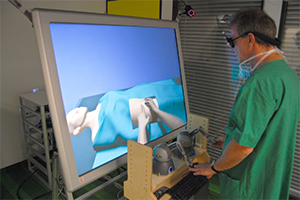 In this paper we present a simulator for two-handed haptic interaction. As an application example, we chose a medical scenario that requires simultaneous interaction with a hand and a needle on a simulated patient. The system combines bimanual haptic interaction with a physics-based soft tissue simulation. To our knowledge the combination of finite element methods for the simulation of deformable objects with haptic rendering is seldom addressed, especially with two haptic devices in a non-trivial scenario. Challenges are to find a balance between real-time constraints and high computational demands for fidelity in simulation and to synchronize data between system components. The system has been successfully implemented and tested on two different hardware platforms: one mobile on a laptop and another stationary on a semi-immersive VR system. These two platforms have been chosen to demonstrate scaleability in terms of fidelity and costs. To compare performance and estimate latency, we measured timings of update loops and logged event-based timings of several components in the software. 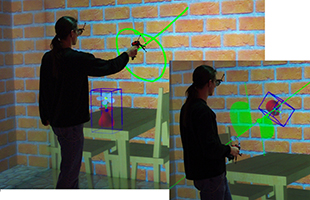 We present a comprehensive 3D sketch recognition framework for interaction within Virtual Environments that allows to trigger commands by drawing symbols, which are recognized by a multi-level analysis. It proceeds in three steps: The segmentation partitions each input line into meaningful segments, which are then recognized as a primitive shape, and finally analyzed as a whole sketch by a symbol matching step. The whole framework is configurable over well-defined interfaces, utilizing a fuzzy logic algorithm for primitive shape learning and a textual description language to define compound symbols. It allows an individualized interaction approach that can be used without much training and provides a good balance between abstraction and intuition. We show the real-time applicability of our approach by performance measurements. 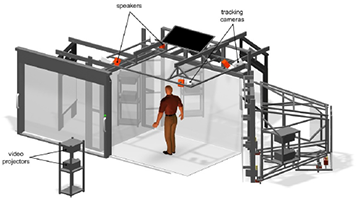 
A Sketch-Based Interface for Architectural Modification in Virtual Environments 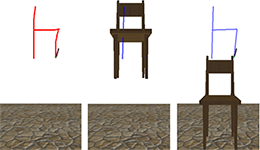 This paper presents a sketch-based interface for interactive modification of architectural design prototypes inside a virtual environment. The user can move around in the scenery and create line drawings to add annotations. In order to modify or extend the scenery, she can sketch command symbols, which are then recognized by the application to trigger the application defined commands. This allows the user to modify existing objects in the scene as well as to create new ones. This sketch based interface is supposed to act as a front-end application for architects in order to have a tool for the interactive reconfiguration of rooms and interior in a visual-acoustic virtual environment.